The following info and pages are from my prior web site on rootsweb with new details added.
Rootsweb Site:  The Newberry Family - Saga of a Clan 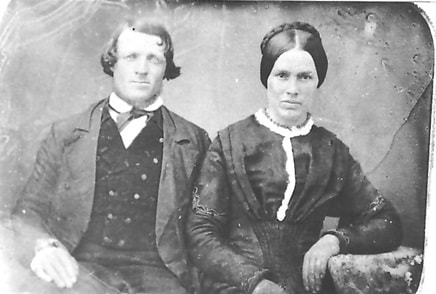 The Newberry story as I know it  began when my family whispered rumors of our Native American heritage. I decided to make a point of finding out what I could and hoped to renew knowledge of my heritage and family, with pride. My Great Great Grandmother, Hannah Maria Newberry Morris made a last photographic record of herself  which hung in my Great Grandmother's home until her death in 1931.The photo mysteriously disappeared, but through detective work I located another copy that I have used in this study. The photo to the left shows her on her wedding day to George Morris, and English emigrant. Her mother is supposed to have given her a heishi necklace for her wedding day and is shown. A later photo showed her as an elderly gray haired, work worn woman in her 60's.  She is wearing a curious necklace which was purported to be Native American in origin, and supposedly bear claw.  I have stared at that photo for hours  trying to see the bear claws buried in the ruffles of her European style dress - to no avail.  I finally decided to start asking questions of people who might have more information. The necklaces have been the only solid clue to her ethnicity. I have found several people from various tribes who have assured  me that it is indeed a Native American  'family necklace'.  See link below.

At the same time I started querying people in N.Y. state about my relatives and found many willing people who have gifted me with huge amounts of research on the family. Ditto for family in Iowa. Our Newberry's lived reclusive lives in an effort to protect  their children. They hid their  Native American heritage to escape persecution and the prospect of extinction. They intermarried with and lived as white men and avoided speaking of their heritage. Wherever they went, they only spoke in half-truths to avoid the treatment forced upon their tribal cousins. Events such as the Trail of Tears, and numerous other death marches forced on the tribes by a land hungry civilization, required them to hide their ethnicity or risk continued genocide.  Jim Stokes, Ojibway elder explained to me that after the uprisings in 1862 many native people took their identities underground, blending with German settlers to avoid the frightening genocides instigated by the U.S. government.  This tactic however, began much earlier with light-skinned native people taking up the plow and separating from their tribes in order for their families to survive.  Many claimed white heritage in order to secure land grants offered by the government - often on their own native lands.

Hannah's parents set out from Warwick, N.Y. for the Ohio frontier around 1819. They headed for "Western Reserve", a part of Ohio that was set aside by the Connecticut Land Company for people who were leaving the east. This land was supposed to be reserved for people who lost their land in the east for one reason or another. Someday we hope to know our family's reasons. Hannah's parents specifically sold their ownership in the inherited family land tosiblings, who in turn eventually disposed of it.

Hannah Maria Newberry was born in Strongsville, Ohio on March 23, 1823. However, the whole story begins generations before she is born, in Connecticut and New York. Her father James Newberry born in N.Y. in 1791 was probably from Iroquoian or Delaware stock, and her mother Mary Smith, Northern Cherokee.  By this time many of  the tribes had intermarried with white men and the Newberry's claimed to be Caucasian in the early (1790) census records. In some cases it is the information that is missing that is most telling!

Physical characteristics have diminished through each succeeding generation. However, a friend of mine who is a Cherokee Elder believes, "the heart contains the flame that shelters our ethnicity, no matter our physical appearance."  The necklace has lead me on a saga of intrigue, and continues to fuel the fire to find more information. The necklace has never materialized, though it has often been mentioned by various people and written about in newsletters published by her Morris descendants.  Some were proud of the heritage, while others persistently tried to hide it. DNA testing has confirmed the family's native heritage, as well as the heritage of numerous other families associated and related by marriage.

Most information on this table was found in the McColl document.  There is another Sam Smith whose daughter married James Newberry, who is from a different Smith Family.

7. Harriet Newberry  b. November 24, 1825  Brownhelm, Lorain, Ohio  d. July 27, 1849 in Montrose, Lee County, Iowa  m. Warren Seth Palmer   March 8, 1847, b. Feb. 22, 1824 in Medina County, Ohio. They were married by Johnston Meek who was a Justice of the Peace. Seth’s parents were Ambrose Palmer and Lettice (Hawkins) Palmer.  When his father died Samuel Bent became his stepfather.[2] His marriage to Harriet was his second. Two children have been indicated, but evidence has not been found. His first wife was to Daphne Roberts who died in Montrose in 1844.  After Harriett died he married Sylvia Goldsmith and they had two sons Edmund A. and Valens A. They lived in Little Sioux, Harrison County, Iowa, but moved to Charles Mix, South Dakota. Palmer is buried there. Burial for Harriet has not been found. Harriet was a posthumous wife of George Morris. Palmer info provided by Linda F*****.

***James A. Newberry had five wives total throughout his life.  1.  Mary Smith (10 children), 2. Nancy Brown (no children), 3. Elizabeth Haskins (7 children), 4. Sybil Pulsipher (no children), and 5. Amanda whose surname MAY HAVE BEEN PACK. This fifth wife has not yet been proven beyond a shadow of a doubt, as marriage records for this period in and around Iowa are rare.  The administrator of this site and this pedigree would be grateful to hear from anyone with more information.  An in depth study has been done regarding this last wife, but records are lacking.****

Naming of this child: The Book of Mormon has a Book of Alma, in which, “Alma the younger was the first Chief Judge and High Priest over all the land of Zarahemla.” [5]  As you might remember Zarahemla, was the City of God, and James lived in the modern Zarahemla (1841) in Iowa during his years in Lee County, Iowa. The name Moroni is derived from the angel who revealed the golden plates to Joseph Smith that would become the Book of Mormon.

Naming of this child: James named his son Joseph Hyrum, to honor the Prophet, Joseph Smith and his brother Hyrum. It was perhaps James’ way of keeping the friendship of Joseph and Hyrum in his heart forever.

Naming of this child:  James probably named this child after Heber C. Kimball.  I have also found in some places he is also called Brigham Heber.  Interestingly, later records seem to drop the “Brigham.”  Does this show James’ displeasure with Young?

Half Brother to the Above Children
Secratus (Williams) Newberry was James' stepson. b. March 24, 1845. Des Moines Township, Lee County, Iowa, d. August 15, 1882 in Pottawattamie County. He married Esther (Stiddam/Stidham) (Hopkins) (Bratton) (Denton) Williams  on November 3, 1878 and they were married by Levi Graybill. Children: David b. 1880. Esther had a daughter Matilda Ann Denton, by her third husband. Secratus died sometime before 1900. There may have been more children. Secratus’ biological father is unknown to us; however we assume he knew the name of his biological father, as he changed his name to Williams in later life. In the last census, Serastus is again shown as a Newberry. [6]

**Note about blessings of Newberry children:  Ronald Watt of the LDS Historical Dept. related to me that Joseph Hyrum was five months old and blessed at the McOlney branch in January of 1850.  Three other Newberry children were blessed that same day. Those would have been Alma Moroni, Serastus, and Heber.

[1] Daughter of Lyman Wight and Mary Ann Otis, born March 4, 1852, Bandera, Bandera Co. Texas
[2] Bent was a member of the Council of Fifty and supporter of the Lamanite mission.
[3] Wixon was a sea captain and owned several ships ported out of Barnstable, Mass., the schooners Roxanne, Peri, Mt. Hope, and Terri.  This family is descended from early chief of the Wampanoag tribe, Massasoit – who assisted the Pilgrims.
[4] Calvin Beebe was the right hand man of Alpheus Cutler, leader of the Lamanite missionaries, who formed a group named the Cutlerites, to which many of the extended family belonged or supported. Calvin’s sister Luana was married to Orrin Porter Rockwell.  It is unknown how Rockwell was related to Submit Rockwell Starr Beebe.
[5] Ziegler, Wesley, An Analysis of the Book of Mormon, reprint by Kessinger Publishing, original printing 1947.
[6] The Williams surname is prevalent in the LDS Church of this time, but Secratus’ father’s name has become an enduring problem for which no solution, to date, has been discovered.  John Smith Newberry, son of James Newberry married a woman named Lucinda Williams.  Her family has also been problematic to pin down.

NOTE: Living persons are indicated by initials only and *'s.

NATIVE AMERICAN INFORMATION ABOUT JAMES A. NEWBERRY
and his ancestors

For fifteen years, I have researched my 3rd Great Grandfather and his Native American Ancestry.  Following indigenous genealogy is much different than follow the lines of people who are recorded by the U.S. Government.
The following summary  gives a lot of information with regard James' ethnicity.
For more information about these families go to:  The Newberry Family - Saga of a Clan (currently offline Feb. 6, 2018. )

For additional reading about the LDS family of James A. Newberry. See: "The Quiet Patriarch"  use contact form here to order.  This book is in the revision process for a second edition.  Use contact form to inquire.