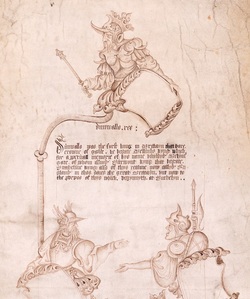 ​Pedigrees of royal and noble families sometimes included their descent from mythical figures. A pedigree of the Earls of Warwick, apparently dating from the Renaissance period (MS 6/33, below), shows their descent from the mythical king Dunvallo, King of Cornwall and one of the descendants of Brutus, who according to Geoffrey of Monmouth won the Civil War of the Five Kings.  This information came from the College of Arms in London.  http://www.college-of-arms.gov.uk/news-grants/news/item/100-pedigree-rolls
NEW RESEARCH

July/August 2018
Recent research commenced in April of 2017 is almost complete.  I will be publishing a monograph detailing the evolution of Lulworth from 1067 through 1600 that will feature information proving that St. Andrew's church was formerly on the manor of Lulworth St. Andrew along with the earlier companion castle of Lulworth. It is possible this location is actually where the motte and bailey castle described by Malmesbury was built. Still little is known about the castle, but cartographers of the 19th century documented its location which is corroborated by Leland's Itinerary of 1535. The Howard's, sixteenth century Newburgh descendants were still living on the manor in 1603 when the granddaughter of Henry Howard 2nd Viscount Bindon died.  Ward of Queen Elizabeth at her death, Ambrosia Gorge's inheritance went to her great uncle Thomas Howard 3rd Viscount of Bindon.  All this and more will be published and available on Amazon.

February 2018
In the past year, I have been researching the overall area of Lulworth.  The history is not well known and finding the information and putting it into context took a great deal of effort.  In questioning some of the county historians, I was always referred to John Hutchins as a source.  The rest was up to me to figure out by accessing various books, databases, PRO and the British Archives.  The process is somewhat like putting together a giant jigsaw puzzle.  Every new document suggests new questions and sources required to complete the search.

Currently, the Lulworth research is coming closer to conclusion with the exception of some royal ties that were a complete surprise.  These ties were not directly related to the Newburgh family, but were connected to a manor that had its origins with the Domesday Book.  As a family the Newburghs held a large percentage of the land surrounding this manor, and during certain periods were the tenants-in-chief for the original manor of Lulworth St. Andrew.  The manor was connected to the original church built and consecrated there in 1225, but had even earlier origins as early as 1150. The surrounding countryside was controlled by Bindon Abbey at the feudal control of the Newburgh family.

Working down the timeline, there was a stumbling block of forty to sixty years, which I am still trying to unravel.  However, the Newburgh family and their descendants definitely lived on the aforesaid manor from 1429 until 1600.  This manor was originally part of the royal demesne.

The history of the people who populated the manor was the main focus of previous work.  As many of you probably are aware in reading Hutchins and other genealogical works, there was a plethora of men named John between 1300 and beyond. In 1485 the most important patriarch died.  He was married twice.  The first marriage produced six children, three males and three females.  His second marriage produced three more children, one male and two females.  Unraveling all of these children and their mothers produced a completely new picture that has never been presented by historians or genealogists.  It suggested his original male heir lost his patrimony due to his politics.  The Newburgh legacy was then passed off to grandsons of the second wife whose son was born circa 1450.  This son was killed after the Battle of Tewkesbury, by Edward IV.  Given the legal documents (charters) that were generated at his death, it appears his death was of a suspicious nature, due to his stepbrother’s (the original heir) involvement with the Yorkist king Edward IV.

June 2017 - Correction:  St. Andrew church was not standing in the 1850's.  New information suggests that the early St. Andrew Church was moved c. 1630-36 from Lulworth St. Andrew.  Nothing is left of the medieval buildings at Lulworth St. Andrew.  When the site was reduced to a farm, a newer 17th century farmhouse was built atop the ruins of the Manor House.  Today, it is impossible to access the site, as it is now part of the Ministry of Defense (MoD) Tank Range, which takes up a large portion of the Juriassic Coast.

June 2016
Recently, I discovered that William Westbury who was the son of Alice Carent Westbury died in 1453, thus negating my research, previously posted here.  When I have made the proper corrections, I will repost my findings.  Until then, this information from the Close Rolls is relevant to the correct lineage.

https://babel.hathitrust.org/cgi/pt?id=coo.31924111042150;view=1up;seq=343
1458  37 Henry VI
p. 327
To the excheator in Somerset.  Order to take the fealties of Nicholas Carent clerk, otherwise dean of the cathedral church of Welles, and John Chafyn, and to give them seisin of a moiety of the manor of Orchardley; as it is found by inquisition, taken on Thursday after St. Matthew, 28 Henry VI, before John Tyler then escheator, that William Westbury the elder long before his death by charter dated Berkeley, 12 January 24 Henry VI gave that moiety to the said Nicholas and John Chafyn and to Robert Wheler of Boxe, their heirs and assigns, to the intent that, when William Westbury the younger should come of age, they should by charter make a grant thereof to him and the heirs of his body, with reversion to themselves, their heirs and assigns, to perform the last will of William the elder, that the grant was made by fraud and collusion to defraud the king of the wardship of that moiety and of the marriage of William the younger, that the said moiety is held in chief of the service of the twentieth part of one knight’s fee, and that William Westbury the younger is cousin and heir of William the elder, and it is found by another inquisition taken 8 June last, before Henry Flaxby then escheator, that William Westbury was siesed of the said moiety, and held the same in chief by the service aforesaid, and by charter (as above) gave the same to the said Nicholas and John Chafyn and to Robert Wheler now deceased, their heirs and assigns to the intent etc. (as above), that the gift was made by fraud etc. for that the said moiety was held in chief, that William Westbury the younger died without issue at Thomer on the eve of St. James the Apostle, 32 Henry VI, [1453] without reaching the age of one and twenty, that by the death of William the elder and by reason of the nonage of William the younger, the said moiety came to the king’s hands and is yet in his hand and that Agnes wife of Robert Leversege is cousin and next heir of William the younger, namely daughter of William the elder father of John his father, and is of full age; and by letters patent of 8 February last, the king of his particular knowledge and mere motion among other things did pardon John Chafyn, by name of John Chafyn of New Sarum ‘gentilman’ or any other whatsoever, for all gifts alienations and purchases of land held in chief to 7 December then last, with the issues and profits thereof taken in the mean time, and by other letters patent of 5 February lst, did likewise pardon Nicholas Carent, and for 6 s. 8 d. paid in the hanaper did respite their homage until [                   *] next.

In June of 1456, John Newburgh Junior was keeper of the castle and lordship of Corfe - the BEAUFORT family stronghold. The duke of Somerset, Edmund Beaufort, was a major Lancastrian player in the Wars of the Roses and was killed at the first Battle of St. Albans.  After his death, 22 May 1455, John Newburgh Junior acted as a mainprise to Eleanor Dowager Duchess of Somerset in delivering her son to the king, because of his minority.  (Cal Fine R. Vol. 19, 163-164) ​