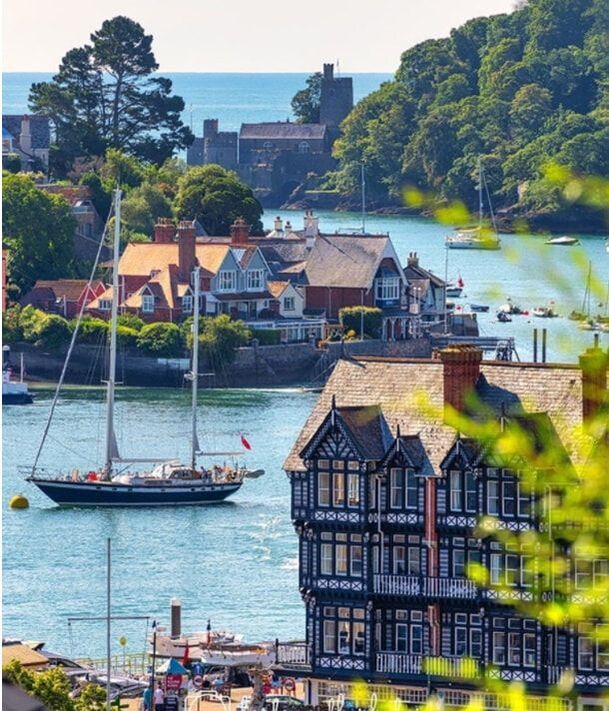 Much of the New World immigration was launched from this lovely harbor in Dartmouth, England.
Charters

When immigration to the New World began some early charters were written by the king to authorize 'companies' of merchants and aristocrats who were willing to put up the funding to provide ships and goods for new settlements.  One interesting gentleman, who was involved with Lulworth Dorset was Theophilus Howard, Lord of Walden and eventually the 2nd earl of Suffolk, Lord of East Lulworth and attendant properties.  The participants list is lengthy with monied and luminary individuals who contributed in some way to the immigration push, many of whom were associated with Dorset.

“Sir Theophilus Howard was named in the Second Charter of Virginia made by King James I on 23 May 1609. The members of this extensive list were "incorporated by the name of The Tresorer and Companie of Adventurers and Planters of the Citty of London for the Firste Collonie in Virginia."  (Encyclopedia Virginia.org, Internet, full transcript 80-98)

Alphabetical list of immigrants
from  various sources and time frames 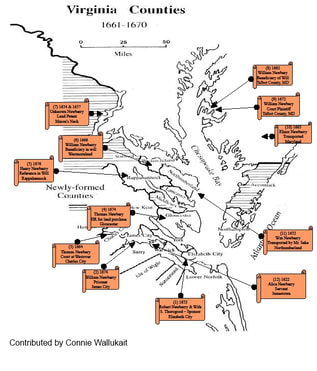 93. – The Adventure to New England from Dorchester [s 107].  The late Mr. F. J. Pope’s account of the Rev. John White’s earlier and unsuccessful endeavour to colonize New England should be supplemented by the following answer in the Chancery Suit Beale v. White: --

On Jun 2nd 12 Charles (1636) Edmund Dashwood, Robert Coker, Benjamin Devenish and John White, Clerk, all of Dorchester made answer at Dorchester to the suit of Henry Beale and Peter Lenartes concerning transactions in connection with adventures to New England . –

“About twelve years since divers knights, gentlemen, and others agreed as joint adventurers for the settling of a plantation in New England.  These defendants had little to do with the adventure beyond paying L20 each, and having lost all their money they about eight years since gave over the plantation.  They refer to the answer of John White Clerk, for a full answer to plaintiffs.  John Tilly and John Watts had been employed by the adventurers as factors to manage the business of the plantation.  The plaintiffs and Peter Lenartes senior, now deceased, had sent a ship “The Sowches Phoenix” to New England.”

The answer of the Rev. John White above mentioned and printed in part by Mr. Pope was dated 12 October 1634.  It contains the following list of adventurers who subscribed their L20 and lost their money.  Mr. Pope omitted the names, but as they were mostly Dorset and Somerset men their interest in New England ought to be here recorded, especially as many of them afterwards emigrated to that country.

“Eleven years sithence and upwards divers knights gentlemen and others did agree to ioyne together in purse as ioynt adventurers for the settling of a Plantacon in New England in America for the better and more convenient taking and saving of the fish in the seas of those parts, and also for bartering and exchange of comodoties transported from the Kingdom of England with the natives of New England aforesaid as of such others as afterwards became adventurers with them; this defendant to his best knowledge and remembrance hath here – under particularly menconed and expressed viz: --

“All of Dorchester, and”

All Sithence deceased, and : --

All in the said County of Dorset, and
Lawrence Adyn and Charles Adyn living about Shrowsbury in Shropshire
Josuah Martyn living about Yeavell in the County of Somerset
Amias Martyn of Ireland
William Gould near Exon in the County of Devon
Henry Gould and Edward Gould brothers of the said William Gould
Francis Crossing of Exon and
Richard Allen of Ditchet
John Connant of Lymington
Richard Cooth of Ensom
John Snooke of Temple Combe

All in the County of Devon and

Notwithstanding this failure John White made another adventure in 1627 for he says. --

“The defendant John Watts being employed in a voyage to New England for the joint adventure of himself and this defendant (i.e. John White) and of Richard Bushrod, Gilbert Loder, William Derby, Bernard Toup, Richard Bury, and George Way, all of Dorchester and of John Connant of Lymington Somerset, Henry Maniford of Long Burton Dorset and Morgan Haine living now as this defendant hath heard farre in the north towards New Castle upon Tyne is said to have taken 26 hogsheads of the salt.  The salt was used for curing fish which became putrid and rotten and was of no value.  Also watts did not take any boats or nets belonging to the plaintiffs.”

The answer of the defendant Watts follows.  He states that he went to New England as a factor and that he found in an island in Cape Anne Harbour a quantity of salt uncovered and open to the air and that he took 26 hogsheads of the salt to cure fish.  The salt however being bad the fish became putrid and worthless.  Mr. Morton then dwelling in New England had claimed the salt.

"London, May 1628
"Sundrie men owe unto the general stock of the adventurers for the plantacion intended at Massachusetts Bay, in New England, in America, in the some of tow thousand one hundredth and fiftie pounds, and is for soe much undertaken by the particuler person menconed hereafter by there several and general stock for the said plantacion subscripcon to be by them adventured in this joint whereunto the Almighty gran prosperous and happie success, that the same may redound to his glory, the propagation of the gospell of Jesus Christ, and the particular good of the several adventurers that now are or hereafter shall be interested therein.  The persons nowe to be made debtors to the general stock, being as followeth : -

Note:  As will be remembered, there was also another contract.  Felt's Annals of Salem, Vol. I., Page 509
​
It will appear by reading this contract for what purpose the company was formed.  And among its subscribers are the familiar names of many early New England settlers.

Forgoing from George Way and his Descendants

George Harwood, Treasurer for the plantacon of the Mattachusetts Bay, oweth vnto sundrie accompts, for Moneyes rcd by him of sundrie adventureres, vizt.

Recently, a colleague has found another Newbery descendant in Boston circa 1642, by the name of Susan Newbery who was born in 1607 in Exeter, later married. Silvester Eveleigh in 1630 in Exeter and arrived in Boston, MA. in 1642. Apparently, the earliest mention of them is in the rolls of admission to the First Church in Boston, which was 19 Jan. 1643.