​After ten years of challenging research, the life of James Newberry
Native American Pioneer for the Latter-Day Saints church comes to life.  You will find The Quiet Patriarch available at Amazon.com for $49.95 . The first edition printed in 2006 was 186 pages. This second edition contains 350 jam-packed pages, with over 800 footnotes/sidebars. You will find new chapters, photos, maps, twelve appendices and a prodigious bibliography. Some additional information for collateral families is included.
The original Newberry web site is back up and functioning on Roots Web.  The information contained within it is strictly U.S. data that has been collected SINCE 1995.  The site was down for many months, but is back up and available to U.S. Researchers of the Newberry family.
THE NEWBERRY FAMILY - SAGA OF A CLAN
SAGA OF A CLAN 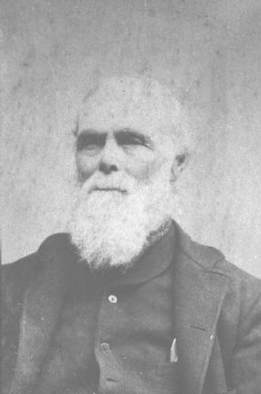 The Native Narrative
James A. Newberry
During the past two decades, I have spent a great deal of time trying to prove (or disprove) the notions that have been passed down to us from former generations regarding the Indian heritage in our Newberry family. The line is so diluted that in 2007 our physical appearances have rendered us ordinary. Some characteristics might remain, but they are mostly negligible. This is fairly normal when a specific blood line diminishes. It makes no difference in how we are regarded and accepted by others; but the debate rages on about our ancestors and their ethnicity.

Unfortunately, some individuals cannot accept the idea of racial intermixing; so the notion is normally dismissed without proper investigation. Proper investigation seems to be a relative term depending upon the depths to which a researcher is willing to plumb. Most people look no further than Ancestry.com, or rely on research done by those in the past. That is not the case here.

In Native American research, methods cannot, and do not follow standard research criteria. In general, cultural and historical differences muddy the findings. Most researchers are not willing to take the time required to access remote sources, or do any but light reading on the subject. It is a rigorously difficult path to follow. The Internet tends to complicate matters as well. Skimming the surface will not yield the truth on this subject.

In this short summary, I will highlight how this family’s research must, in some ways depart from standard genealogical methodology. Success in researching indigenous people depends on knowing American history, both the good and the bad,  while also looking for cultural and ethnic differences. One must also determine when revisionist history is in play. Bias by some historians is problematic.  During the 18th and 19th centuries, it was not popular to be of indigenous extraction.  By in large, white culture held folks who were “Indian” in contempt. Some contemporary historians will tell you that there was no intermixing of races in early American history. They are kidding themselves.

When I began this project, I remember thinking to myself – “This shouldn’t be too hard to figure out.”  Some days, I find myself asking why I ever began the search, and other days, I find myself beaming with gratitude for the clues that seem to magically appear whenever I become discouraged.

Contemporary stories, handed down through past generations suggest a racial tug of war began with the early colonials. Unfortunately, it continues today.

Growing up in Utah, among people of the LDS faith, my maternal family always told me about the wonderful woman who was my second great grand mother, Hannah Maria Newberry Morris.  Hannah was born in 1823 in Strongsville, Ohio. She has been an inspiration not only for her strength, but her unshakeable devotion to her family. Hannah was said to have been a Cherokee (Tsalagi) woman. It was also thought that perhaps she was a medicine woman; though, I believe, this probably stretches the truth.  She had what was termed a “bear claw” necklace that she wore for her last photograph.  It was this photograph that launched me on this journey. Since that time, I have been approached by other members of the family who claim that their recent great grandparents had a photo of Hannah’s mother, Mary Smith Newberry, wearing braids, feathers and a somewhat traditional native costume.  Being that I have been the driving force on this research, they have come to me looking for said photo.  I am sorry to say I don’t have it.  If anyone reading this happens to discover it, I would be grateful if you would contact me.
​
Many family members, now and in the past, have argued the point of Hannah Maria’s ethnicity. Now, some are open to the notion, while others vociferously deny the possibility. What they are afraid of is anyone’s guess. Ordinary family genealogists have done nothing but collect vital statistics through censuses and other easy records. Many records have been dismissed and discrepancies glossed over; rather than pursuing a proper investigation. Of course, there are those questions that will never be answered, simply because, there are no extant records, recording ethnicity . . . or are there?

Within weeks of commencing my research, I realized that Hannah’s parents were some of the first people to join the LDS Church. Plunging headlong into the Internet message boards I found other contemporary family members.  My first encounter was with a cousin Janice R.  on November 11, 1999. We began trading information about the part of the family that remained in Iowa. Other factions went west to Utah and California. After finding one another, we began a family web site where many more people joined the discussion and a wealth of information flooded in.  Unfortunately, the web site was removed when Ancestry.com bought myfamily.com.  I have however, continued to hold all the information that was shared for fifteen years.  On that web site there were the naysayers who often became vitriolic, who could not accept known evidence, unless it was corroborated with federal records.  I would like to summarize the evidence. Some clues are considered “circumstantial” while others are solid.

Solid CLUES as to ethnicity

3.   Hannah also left another clue, via the method with which she named her children. Each one of
them bears her maiden name as a middle name, a  matrilineal custom through which she tried to
maintain her ethnic and personal identity. She seems to be the only daughter who did this.  I
believe she did this because of her allegiance to her mother.  Neither were baptized into the  LDS
church until much later in  their lives. In Hannah's case, she was rather ambivalent about the
church and her husband who finally left her pregnant and alone to live with his wife Annie who was
his only living polygamist wife. Hannah was locked out of the cellar where provisions were kept
when he left.  My great grandmother Sarah Grow Morris went into Salt Lake and took an ax to the
padlock to let her in, so she could feed her children and herself.  Later, there was a federal hearing
about Hannah's husband George Morris and his living arrangement.  Her children stood behind
her.

In the beginning, Lamanites (Indigenous people) were of utmost importance to the LDS Church. Hyrum Smith (brother of the Prophet Joseph Smith) who held the office of  Church Patriarch provided James Newberry’s patriarchal blessing which  identified  him as being from the Tribe of Manasseh described in the Book of Mormon.

According to the President of the LDS Church in the 1950s this meant the recipient was an "Indian."  To those folks who are not LDS, and even some who  are, this proof isn’t as acceptable - preferring U.S. Government    documentation. I would point out, it is known that these blessings are considered  highly accurate, especially taken with the fact that Hyrum Smith knew James Newberry personally. James sat before him to receive this blessing. Also the early date of the blessing is a good indication as to the authenticity of the  information. Two professional Mormon historians have assured me this is  correct. James Newberry was part of Joseph Smith’s trusted circle of members.  James was  able to participate in rites that were off-limits to the greater population.
1.  In my own family, my grandmother (grand daughter of Hannah) was ostracized by her
husband's  family for what they knew about her ethnicity. They in fact, disowned my grandfather for
marrying her. My aunts remember hearing my grandfather, in times of anger, use racial epithets
​              directed at her.
2.  James’ Iowa grandson wrote a letter to a Utah cousin with a description of  James. I have a copy in my
files.  He mentioned the Indian ancestry, but was unable to cite which tribe.
3.  DNA tests in 2003 revealed Siberian and Polynesian markers in our Newberry line
via Y-DNA tests. I was informed that these markers are indicate native blood.
A second test in 2009 confirmed and expanded these markers as being indicative of Native ancestry.
The tests showed a haplotype of R1b.  The map included with the test,  plotted the tribes in Northern
Florida and the Great Lakes, which would indicate the Cherokee (Tsalagi) and Haudenosaunee
(Iroquois)  tribes.  The Iroquois Confederacy had blended members of a southern tribe that were related
to the Cherokee (Tsalagi) known as Tuscarora who migrated into New  England circa 1713.

IOWA CONNECTION JAMES’ WIVES AND CHILDREN
During my study, I contacted a lot of scholars who have given me information; however, Colin Calloway, head of Native American Studies at Dartmouth, gave me one piece of information that has always stuck in my mind while doing this work.  Usually, the early families tried to maintain their lines by marrying into other families who were likewise Native American; although, if married to a white person the whole family would claim to be white. Claiming to be white was safer in the 1830’s than claiming that your family was descended from indigenous stock.  The dilution of the native characteristics, if each side married a white person would supposedly purify the line, to make them more socially acceptable.  Even the early ideals of the LDS Church, through the prophet Joseph Smith echoed this, when he mentions that the native races would eventually become “whitesome and delightsome,” through intermarriage. Several of James Newberry’s children and siblings married into families where the heritage can be traced back to early native families.
​
Known intermarriages are:

If the knowledge of our native heritage were not so widespread through various collaterals, we all would be inclined to believe that the heritage was just someone’s wishful thinking. However, viewed as a whole, it would appear the evidence is conclusive on many fronts, yet specifics are still missing. The whole picture is still unfinished. With luck, someday the whole story will come into clear focus.
​
You may not agree with what I have written here, because the evidence is non-standard and possibly unacceptable to those who follow standard research paradigms. To those who do not understand, I recommend reading up on Native American genealogy – it is different. There are still records that will yield more answers, but it could take years or decades to sift through the rich data related to the various family lines. This my friends, will take dedication and perseverance – are you up to the challenge?  In closing, I would like to quote Dr. Wayne Dwyer, “The highest form of ignorance is to reject something you know nothing about;” so keep and open mind and enjoy the ride.

My sincerest thanks to two astute Mormon historians and personal friends, for their support and expertise.  Mrs. Irene M. Bates, UCLA, and D. Michael Quinn, Harvard.  More information is available in my book The Quiet Patriarch, 2nd edition to be available in the future.