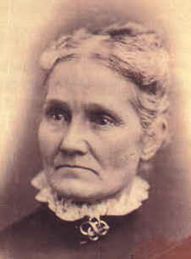 The Necklace
After securing a reasonably good copy of the photograph, I located  two experts*
who identified the necklace as a relic from the Iroquois Six Nations Confederacyand/or Northern Cherokee. The necklace is what they call a 'family necklace' whichis quite common and essentially the equivalent of wearing your genealogy or a coat of arms around your neck. It  was generally passed on from mother to daughter in a matrilineal society.  I believe Hannah Maria wanted us to know her heritage, though she and her children and grandchildren were forbidden to speak of it due to prevailing prejudices.

The pendant part of the necklace is especially perplexing to even the most expert of my  sources. At first, I thought it was a small, animal vertebrae  hanging from the main body of the necklace. The choker portion of the necklace appeared to be teeth or claws (possibly shark's teeth or turtle claws) with spacers or beads between. But through further research, I have discovered other possibilities. (see below).Humorously, the family  thought they were looking at a bear claw necklace, which it obviously IS NOT.  She may have had that type of necklace, but it wouldn't have been a family necklace.

Following the Snake . . .
Elders from two different tribes have indicated they believe the necklace was a figure of a snake. In Cherokee myth
there is a story about the Uktena, which is a mythic snake.  There are many stories regarding this serpent and its supposed 'medicine' in the cosmology of the Cherokee religious beliefs. One of the foremost Indian historians of the 19th century, James  Mooney wrote several essays on Uktena. See:  James Mooney

One myth about the Uktena can be read at the Cherokee Phoenix website. On this site, there is a drawing that looks
similar in representation to the one in the photo, but I have not yet found anyone who can verify if this is indeed what exists on Hannah's necklace, nor the history behind it.

Other people have looked at the necklace and commented the hanging segment represented a Celtic knot. If the pendant  represents a Celtic knot, one would reason the material from which it is manufactured would be silver.  The northeastern Indians had a lot of metal ornamentation, which originated from English trade goods. There are some excellent resources  that show hundreds button, gorget, and pendant designs, but none that look like this  pendant. (Beauchamp, William M.,  Metallic Ornaments of the New York Indians, New York State Museum Bulletin 73. 1903)
There are some Mississippian culture, copper figures that resemble the design, but are flat two-dimensional designs.

The Mohican (Mahican) tribe has a symbol that is similar to this design, but it is flattened and two-dimensional. (see below).  Sculpted in the proper way, the symbol below could be a manifestation of what we can see on the pendant. This is the  "Many Trails"  symbol used by the Stockbridge Mohicans.

The Mohegan tribe, too, has a similar symbol.  One can view it at: Mohegan button  The lore surrounding it is as follows, and is borrowed from the Mohegan site. "The button is thought to be from the mid-eighteenth century.  The carving design in the Mohegan Tribal symbol and has very ancient meaning.  The four large domes point to each of the sacred four directions.  The design represents the back of the Grandfather Turtle upon whose back all life was created or the wigwams where the Mohegans lived.  The v-shaped designs between the mounds of the domes are parts of the Tree of Life, which grows from the roots of Mohegan ancestors and branches toward future generations.  The small dots represent people."  Unfortunately, I was unable to reproduce the button on this page, so one must shift from this site to the Mohegan Button to compare.

The fact that the N.E. tribes are closely related and are descended from the Leni Lenape, or grandfather tribe, help us to understand the similarities in symbolism and inter-relationships between the tribes.  The Seneca for instance, have a similar traditional story. By viewing former family genealogy it is thought that perhaps Hannah's family actually began with the Wampanoag Tribe.  When the Wampanoag underwent grave changes during the colonization of America, the family was assimilated along the  way with tribes who resided in the inland interiors of Vermont, Connecticut and New York.  We pick up Hannah's  great grandfather,  John Newberry in Groton, Connecticut in the early 1700's, who was descended from Tryal Newberry. The pilgrims  met The Wampanoag  tribe led by Massasoit when they landed at Plymouth. Another arm of the family who intermarried with the Newberry's in the 1840's  has been traced back to the Wampanoag of Gay Head. Hannah's sister Lecty was married to George John Wixon who descends from Massasoit. After following this research into archaeological tribal history, it is possible that my primary assumption that the "teeth or claws" scenario is incorrect.  In studying a monograph from the Rochester Museum and Science Center,( who have a tremendous collection, and house the Louis Henry Morgan Iroquoian exhibit) I found a photo which I think may illustrate the choker portion of Hannah's necklace.*  The necklace below is an antiquity from the 1600's. The  description is as follows. Shell necklace (detail) from the Power House Site, Seneca Iroquois, c. A.D. 1640-1660.   bird effigies, length of bird effigies 4-6 cm (RMSC 856124)

Hannah's Time
My sources say the items on Hannah's necklace gave her  "important or special"  tribal social standing, such as a "Beloved  Woman".  Very little is available biographically about Hannah Maria.  Her life was controlled by her circumstances. She was apparently not literate, though  her brothers and father were. A family journal exists written partially in her father's hand.  Other accounts of the family are written in her husband's hand. Oral family lore said that she was a medicine woman. At this point in time (2005) the native people who have chosen to comment on her status say that there is nothing special about her tribal affiliation.  Born in 1823 and raised up in an LDS family, after 1831 but not baptized until 1843,  any uniqueness as to her heritage was probably lost forever, as times were brutal for native people. One thing is certain, in the autumn of her life she attempted to bring her two worlds together posing for a photographer  wearing her family necklace.
​
The complete answer, when it comes, will ultimately be from elders of the proper tribe within  the Six Nations or the modern Mahican Confederacy or Cherokee Nation. The New England tribes pushed to near extinction, joined with other the Iroquoian tribes and pushed to the western frontier. Most of those joined their cousins and brothers in New York, before being forced west to Ohio and then to other reserves, where the United States government always forced them to cede their lands to advancing settlers. It is interesting to study and understand the dynamics and relationships with the tribes. One would think that each tribe was an entity in itself, and to some extent that is true, but all the tribes are inter-related and the process of understanding these relationships can boggle the mind of the uninitiated.

Hannah's  line was diluted with European ancestry, as was often the case. In the early 19th century we believe the line wasre-infused with Northern Cherokee ancestry. There are many possibilities but written records are scattered, or non-existent.None-the-less, hard to come by. This search too - continues.

In looking into this family history, I have come a long way down a fascinating and exciting road. On the way, I have metfamily members from the mid-west who heard the same stories about their direct ancestors for the past 180 years. There still exists within the Newberry family, a homestead steeped in Iowa State history in Lee County, Iowa - where the original people set down roots in the 1830's.

Finally, I have met a lot of wonderful, supportive people who have selflessly helped to locate evidence, and in the process forged many new friendships. To these generous folks  who are flung like pebbles across our vast continent, I say - thank you for your generosity and sharing spirits!   It seems that all the older Elders who might have known, have passed on.  The knowledge has passed on with them.  So perhaps one day an answer will come to us,  but for now, I must put this side, and ask the ancestors to send an answer. If it comes, I will surely let you all know.

Resources: (this is a short list)
* Hammett, Julia E. and Beverly A. Sizemore, "Shell beads and Ornaments: Socioeconomic Indicators of the Past". In Proceedings of the 1986 Shell Bead Conference: Selected Papers. C. F. Hayes III, ed. Pp. 125-138. Research Records No. 20. New York : Rochester Museum and Science Center . 1989
*Beauchamp, William M., Metallic Ornaments of the New York Indians, New York State Museum Bulletin
73. 1903
* Since last fall I have contacted a non-Native author Lois Sher Dubin who has written an beautiful and authoritative volume titled, North American Indian Jewelry and Adornment, Abrams, N. Y., N.Y.; however, she was unable to give any answer regarding this particular object.
* I also queried various museums in New York and Washington D.C..  None of whom were able to help very much.