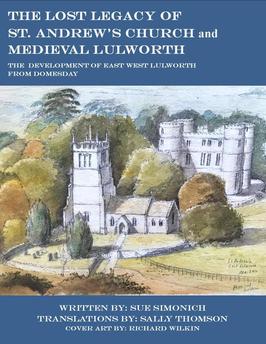 ​THE LOST LEGACY  OF ST. ANDREW’S
CHURCH and MEDIEVAL LULWORTH
The Development of East/West Lulworth  from
Domesday

​75+ pages includes pedigrees  and appendices. Citations
from original sources and an extensive bibliography.

Note:  Due to events beyond author's control, publication
date has been delayed indefinitely.

​AN OVERVIEW
Looming over the sapphire depths of Lulworth Cove the chalk cliffs of Dorset have been home to roving Briton populations for millennia. The iron-age Celts held sway over Bindon Hill from 800 BC until the invading Romans advanced into Britain in 43 AD. When the Romans retreated, Germanic hordes of Anglo-Saxons invaded the land, but by 1066 they too succumbed to conquering Norman invaders and their future kings. All gamboled across the fortress-like landscape, building new cultures while variously altering the story of Wessex.  The Conqueror’s cousins were heavily invested in Dorset. They built a medieval culture spanning five centuries while developing protective sentinel outposts along the English Channel.
​
A CROWN MANOR

Sited atop the soaring downs of Lulworth with a view of the Isle of Portland, St. Andrew’s Church was originally founded in the twelfth century on the Crown Manor of Lulworth St. Andrew. In its heyday it was tenanted by generations of the noble Newburgh family.

Inaccurate histories stemming from problematic research have erroneously dated St. Andrew’s church as 15th century; when in fact, its antiquity may have extended as far back as the Saxon occupation of Lulworth. The earliest known records from the Augustinian Priory of Merton suggest St. Andrew’s existed concurrently with the original Cistercian Abbey of Bindon located just under a mile away on a lower geologic shelf east of Lulworth Cove.

Five centuries after its 1225 consecration, St. Andrew’s Church was relocated after 1630 to the post medieval site of Lulworth Park -1.25 miles northeast of the early Crown manor.
Today, St. Andrew’s Church graces the contemporary Weld estate near the 17th century Lulworth Castle. The church’s elegant tower is all that remains of its 12th century fabric. After its relocation and subsequent renovations, the original English Gothic architecture of the main body was lost. While the tower remained largely unchanged, Victorian era architects recreated the church in the Perpendicular style typical of the common Anglican parish church.

Historian John Hutchins was instrumental in keeping the church’s history alive when in 1774 he reported on St. Andrew’s in his History and Antiquities of Dorset County.[1]  Later, during the 19th century as an architectural apprentice to architect John Hicks, novelist Thomas Hardy stood in support of St. Andrew’s and recounted its antiquity.

Records recently uncovered from various sources have provided an even more accurate understanding of St. Andrew’s origins, patrons, history and founding. Ironically, by surviving into the present St. Andrew’s tower preserved its own and Lulworth’s medieval past.

THE LAND AND PEOPLE

Originally, the Lulworth tract contained over 45,000 acres and was tenanted by the Newburgh family.
A fourteenth century charter roll suggests it extended many miles across the coastal chalk cliffs from beyond the western curvature of Lulworth Cove, heading due east all the way to Purbeck Forest. (Calendar of Charter Rolls Vol. 2,  217)  During the extended medieval period, this littoral land mass supported an agrarian population scratching a living from the headlands and deep vales near the English Channel.
Established almost due north of Bindon Hill and a fractional mile northeast of West Lulworth, the medieval Manor of Lulworth St. Andrew was handed down through descendants of William I. The original manor was tenanted-in-chief by the Newburghs as early as 1150 up until 1530 when the Howard family gained possession through Henry VIII.

In 1641 the Weld family of London acquired the entire Newburgh/Howard estate, including the unfinished ‘hunting lodge’ built by Thomas Howard, 3rd Viscount Bindon in 1609. Eventually completing it, they named it Lulworth Castle in honor of the previous known castle of greater Lulworth.
An accurate understanding of Lulworth’s history during the tenure of the Newburgh family has been disjointed and deficient.  Modern topographical confusion of the Newburgh’s tenure stems from the belief that the seat of East Lulworth was always located on or near the current Weld Estate at Lulworth Park. The medieval manor’s immense territory was essentially ignored by 18th century historians in favor of acknowledging Thomas Howard’s Lulworth Park as the hub of East Lulworth.

Today, the Lulworth tract stands reduced to approximately 12,000 acres but remains under the able stewardship of the Weld family.  In the twentieth century (1917) the ancient manor/farm of St. Andrew’s was sold to the United Kingdom’s Ministry of Defence (MOD) and became a strategic tank facility and firing range. All evidence of the medieval monuments was unfortunately destroyed or buried. Thankfully, the monuments’ existence was recorded by early 19th century Ordnance Surveys.
​
Medieval East Lulworth, also known as the manor of Lulworth St. Andrew is the subject of this study. Following a timeline format, the bulk of this report explores the documented history of St. Andrew’s church, the original Crown manor attributed to William the Conqueror at Domesday, and the two incarnations of Bindon Abbey.

​TABLE OF CONTENTS BELOW 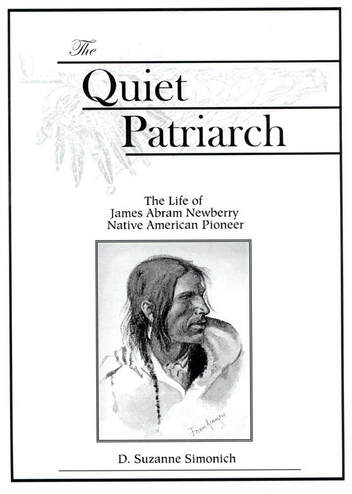 The Quiet Patriarch
by Sue Simonich

Author and historian, Sue Simonich writes a concise history of The Quiet Patriarch, aka James A. Newberry born 1791, in Bellvale, New York.
By 1818 his burgeoning family journeyed into mid-America, staying a spell in Ohio near the Connecticut Western Reserve. After joining the Mormons in 1829, high adventure took them to various areas of America’s heartland. By 1845, via polygamous unions, the Newberry family expanded.
After Brigham Young left for Utah, Newberry made his home in Pottawattamie County, Iowa. The volume contains a tightly written synopsis of this family and their role in Mormon history; plus, the seldom mentioned story of dissenters and their reactions to the martyrdom of their prophet and hero, Joseph Smith.   Anticipated 2nd edition  2020-2021, edited with new information.
Contains 185 pages, 575 citations, numerous appendices, family tables, bibliography and photographs.

LAMANITES IN THE EARLY LDS CHURCH
James Newberry and his aboriginal brethren
by Sue Simonich 2018
​
Heavily annotated, this scholarly article walks the reader through the life and times of James A. Newberry and his affiliation with the early LDS Church.