After twenty years of study Richard Newberry of Weymouth and Malden, MA is finally less of a genealogical enigma.  Research into his family has created a wealth of information about Newburgh/Newberry studies everywhere.  But now we believe we may have cracked the code of his family in England using documents from the TNA.

This information conforms with information provided by the College of Arms in 1925 to Joseph Gardner Bartlett when they corresponded about inaccuracies in Bartlett's Newberry Genealogy.

John II and his wife had sons William, Henry and Roger Newberry.  Roger of Stockland married 1. Alice Pinney and 2. Willmott Coy.  Alice and Roger's son was Richard Newberry who died 1685 in Malden, MA.

William and  Ellen's son Richard Newberry married Grace Matthew of Yarcombe.  Their son Thomas Newberry arrived in New England on the Mary and John about 1633/34 and died in 1634/5.

The New England immigrants Richard and Thomas were second cousins.

Richard's descendants are thought to have been families who settled in Connecticut, but this is not unequivocally proven.  These Newberry's who settled on the lands of North Groton, Connecticut, among the Native people were further thought to have migrated inland to N.Y. along the Oblong and Little Nine Patent. They settled near the Monrovians who were ministering to the Indians of the area. See generations III and IV.

Most information on this table was found in the McColl document, author's files.
*Sam Smith from Smith’s Clove is the son of the notorious Tory – Claudius Smith.  There is another Sam Smith whose daughter married James Newberry, who is from a different Smith Family.

7. Harriet Newberry  b. November 24, 1825  Brownhelm, Lorain, Ohio  d. July 27, 1849 in Montrose, Lee County, Iowa  m. Warren Seth Palmer   March 8, 1847, b. Feb. 22, 1824 in Medina County, Ohio. They were married by Johnston Meek who was a Justice of the Peace. Seth’s parents were Ambrose Palmer and Lettice (Hawkins) Palmer.  When his father died Samuel Bent became his stepfather.[2] His marriage to Harriet was his second. Two children have been indicated, but evidence has not been found. His first wife was to Daphne Roberts who died in Montrose in 1844.  After Harriett died he married Sylvia Goldsmith and they had two sons Edmund A. and Valens A. They lived in Little Sioux, Harrison County, Iowa, but moved to Charles Mix, South Dakota. Palmer is buried there. Burial for Harriet has not been found. Harriet was a posthumous wife of George Morris. Palmer info provided by Linda F*****.


James A. Newberry had five wives total throughout his life.
1.  Mary Smith (10 children)
2. Nancy Brown (no children)
3. Elizabeth Haskins (7 children)
4. Sybil Pulsipher (no children)
5. Amanda whose surname MAY HAVE BEEN PACK.
This fifth wife has not yet been proven beyond a shadow of a doubt, as marriage records for this period in and around Iowa are rare.  The administrator of this site and this pedigree would be grateful to hear from anyone with more information.  An in depth study has been done regarding this last wife, but records are lacking.****

Naming of this child: The Book of Mormon has a Book of Alma, in which, “Alma the younger was the first Chief Judge and High Priest over all the land of Zarahemla.” [5]  As you might remember Zarahemla, was the City of God, and James lived in the modern Zarahemla (1841) in Iowa during his years in Lee County, Iowa. The name Moroni is derived from the angel who revealed the golden plates to Joseph Smith that would become the Book of Mormon.

Naming of this child: James named his son Joseph Hyrum, to honor the Prophet, Joseph Smith and his brother Hyrum. It was perhaps James’ way of keeping the friendship of Joseph and Hyrum in his heart forever.
​
3. Heber (Brigham) (Abraham) Newberry born at the Precinct of Kanesville, Pottawattamie County, Iowa. August 26th 1849, m. Massie Almira Winegar, daughter of John Winegar and Elizabeth (Smith) Winegar on July 4th 1871 by Levi Graybill.  Baptized in the RLDS Church in June 19, 1866 by his father James Newberry. The name Brigham was dropped at some point but is found in some records. The name Abraham is found in some records, but not universally. d. January 22, 1923, at his home, south of Tryon, McPherson Co., Nebraska, buried at Good Hope Cemetery, northwest of North Platte, Nebraska. Children:  Emma, b. 1874; Lilly, b. 1876; John W., b. 1878; Pearl, b. November 1879; Effie J., b. August 1883; Katie L., b. March 1887;  Isabelle F., b. March 1891; Ray James, b. August 1895.  Information provided by Dick Jessen.

Naming of this child:  James probably named this child after Heber C. Kimball.  I have also found in some places he is also called Brigham Heber.  Interestingly, later records seem to drop the “Brigham.”  Does this show James’ displeasure with Young?

Half Brother to the Above Children
Secratus (Williams) Newberry was James' stepson. b. March 24, 1845. Des Moines Township, Lee County, Iowa, d. August 15, 1882 in Pottawattamie County. He married Esther (Stiddam/Stidham) (Hopkins) (Bratton) (Denton) Williams  on November 3, 1878 and they were married by Levi Graybill. Children: David b. 1880. Esther had a daughter Matilda Ann Denton, by her third husband. Secratus died sometime before 1900. There may have been more children. Secratus’ biological father is unknown to us; however we assume he knew the name of his biological father, as he changed his name to Williams in later life. In the last census, Serastus is again shown as a Newberry. [6]

**Note about blessings of Newberry children:  Ronald Watt of the LDS Historical Dept. related to me that Joseph Hyrum was five months old and blessed at the McOlney branch in January of 1850.  Three other Newberry children were blessed that same day. Those would have been Alma Moroni, Serastus, and Heber.

[1] Daughter of Lyman Wight and Mary Ann Otis, born March 4, 1852, Bandera, Bandera Co. Texas
[2] Bent was a member of the Council of Fifty and supporter of the Lamanite mission.
[3] Wixon was a sea captain and owned several ships ported out of Barnstable, Mass., the schooners Roxanne, Peri, Mt. Hope, and Terri.  This family is descended from early chief of the Wampanoag tribe, Massasoit – who assisted the Pilgrims.
[4] Calvin Beebe was the right hand man of Alpheus Cutler, leader of the Lamanite missionaries, who formed a group named the Cutlerites, to which many of the extended family belonged or supported. Calvin’s sister Luana was married to Orrin Porter Rockwell.  It is unknown how Rockwell was related to Submit Rockwell Starr Beebe.
[5] Ziegler, Wesley, An Analysis of the Book of Mormon, reprint by Kessinger Publishing, original printing 1947.
[6] The Williams surname is prevalent in the LDS Church of this time, but Secratus’ father’s name has become an enduring problem for which no solution, to date, has been discovered.  John Smith Newberry, son of James Newberry married a woman named Lucinda Williams.  Her family has also been problematic to pin down.

The FOREGOING information was amassed from 1999 through 2006, when MYFAMILY.COM offered free space for  families to trade information.  Living researchers are indicated by first name, last initials and asterisks for privacy reasons.

For more information about these families go to:  The Newberry Family - Saga of a Clan (currently offline Feb. 6, 2018. )
For additional reading about the LDS family of James A. Newberry. See: "The Quiet Patriarch"  use contact form here to order.  This book is in the revision process for a second edition.  Use contact form to inquire. 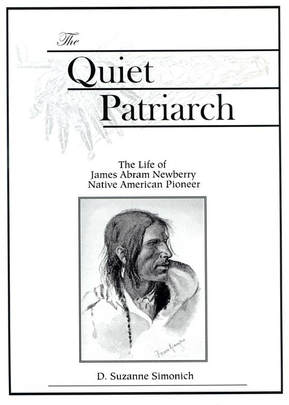 ​The Quiet Patriarch is a title dedicated to the James A. Newberry family, who were pioneers with the L.D.S. Church.
The author is working toward a reprint sometime in 2021.